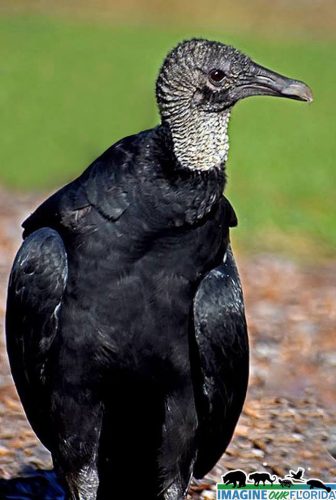 The Black Vulture, Coragyps atratus, is smaller than the Turkey Vulture, although it still is a large raptor. They have a dull black head and body with wrinkles covering their head and face. The tips of their bills are gray and their legs are pale white. Black Vultures have a wingspan of 54 inches and their wings have white tips on the underside. They weigh 3 to 5 pounds and stand 22 inches tall. While in flight, they will hold their wings flat and will flap them more often than the Turkey Vulture.

Black Vultures are monogamous, often not straying far from their mate. Females will lay 1 to 4 egg clutches between February and June in caves, hollow logs, or thickets. Although they do not build nests, they will dig a hollow and put vegetation around it to make it secure. The nesting period can be up to 100 days with the eggs hatching within 40 days. Together, they will feed their young for up to 8 months. This dependence helps establish the strong social bonds these birds exhibit.

As carrion eaters, they are often found in landfills or along roadways where they feed on roadkill. They will usually return to known food sources instead of actively hunting. Black Vultures do not have the keen sense of smell other vultures have and must find their food by sight. You will find them roosting in tall trees or on electrical pylons where they can easily spot 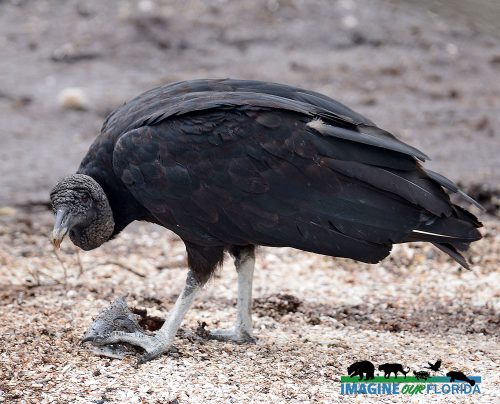 The Black Vulture is protected under Federal Law and can not be killed without a permit from the US Fish and Wildlife Service. 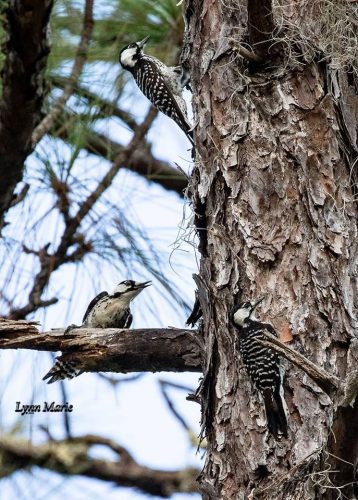 As you saunter through a longleaf pine forest, tortoises feeding on wiregrass and other herbaceous plants of the open forest floor pay you little mind. If you are lucky. If the forest has been able to have fire keep it clean. If there are enough old-growth longleaf pines present to sustain them. If all these things are in your favor, you may be lucky enough to see this little gem.

The red-cockaded woodpecker (Leuconotopicus borealis) is an endangered species across its remaining range. Once found from Florida north to New Jersey and Maryland and west to the eastern parts of Texas and Oklahoma, they are now extirpated from Kentucky, Maryland, Missouri, New Jersey, and Tennessee. There are now just over 14,000 estimated individuals in 5,627 known groups left in their shrunken range.

There are a few species that look similar to the red-cockaded woodpecker. One of the good ways to identify this species is by the large, white cheek patch on each side of the head. In males, this patch will have a very small, almost invisible red streak on each side of the white patch (the cockade). They feed on small insects such as grasshoppers, roaches, ants, beetles, caterpillars, and some berries.

Unlike other woodpecker species, the red-cockaded woodpecker nests only in live, old growth pine trees that are infected with red heart fungus. This fungus makes the wood softer for cavity construction. It can take up to two years to construct a cavity and a breeding group, or cluster, will have multiple nest cavities in their home range. The red-cockaded woodpecker is a cooperative breeder with a breeding pair and several helper birds, usually sons from prior hatches. The breeder male will also drill holes under the nest cavity to cause the pine to produce sap flows. This helps prevent nest raiding snakes from entering the hole.

Why did this species decline? Why are they endangered? This species requires old-growth longleaf pine forests that experience frequent fires which keep the forest floor clean and open. That type of forest is among the most endangered ecosystems in the world. Only 3% of the longleaf pine forests remain. Loss of habitat combined with the fire suppression policies of the recent past combined to cause their rapid decline.

BUT……. it’s not all bad news! Through the hard work of hundreds of forest rangers and biologists, there is a population increase in the red-cockaded woodpecker. Restoring the pine forests, returning fire, and carefully relocating individuals to new, healthy forests have helped this species to increase their population. They are not in the clear yet, but with the continued hard work and efforts of these dedicated individuals, this species will delight for generations to come.

Imagine Our Florida would like to thank one of our members, Lynn Marie, for providing these wonderful images she that took in The Ocala National Forest!

Your ticket for the: Red-Cockaded Woodpecker