Get your IOF’s custom bumper stickers

Imagine Our Florida, Inc. have 2 custom bumper stickers available for sale for $5 each which includes tax and shipping to you. Click here to order yours now.

It’s really warming up here in Florida and with little rain, animals are on the move trying to access the limited resources available. This includes the gopher tortoise, a species in decline across it range. How can you help them if you see one?

Second: Never put them in a body of water. They are not aquatic.

Never attempt to relocate a gopher tortoise on your own. Gopher tortoises have an amazingly strong homing instinct and will try their best to return to their home burrows. This puts them at greater risk for road mortality, predation as they lack the protection of a burrow as they wander, and exposure to the elements.

Let’s all work to protect our amazing animal friends that we are so lucky to share the Earth with!

Be sure to give our page a “Like” to learn more about Florida’s wildlife and wild spaces. 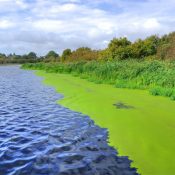 The kids are out of school and it’s time for that well-deserved vacation. Before you head out the door you might want to check for algae blooms

Can you imagine being able to look at a tree that was around when Mt. Vesuvius erupted and destroyed Pompeii and Stonehenge was being built? Or a tree that was so tall it was used by the Seminoles, and other Native American tribes, as a landmark? And did you know such a tree grew in Florida?

The Senator, believed to be the oldest and largest Bald Cypress tree in the United States (and eighth oldest tree in the world) was such a tree. At its peak, the Senator reached a height of 165 feet, but was shortened by a hurricane in 1925. Sadly, this magnificent tree was burned down in 2012. But, its charred remains can still be viewed today – its massive 35-foot stump a testament to its former greatness – at Big Tree Park in Longwood, Florida.

Just forty feet away along the same boardwalk, Lady Liberty gracefully towers over the park at a height of approximately 89 feet. She is considerably younger than the Senator and, although we should never ask a lady her age, is believed to be approximately 2000 years old. Her trunk has a circumference measuring approximately 35 feet. When gazing up at her, one wonders what secrets she could tell…

Thankfully, not everything was lost with the Senator’s unfortunate demise. For, DNA had been extracted with the goal of cloning this amazing tree, which possessed extraordinary defenses against disease and capability for quick growth. The Phoenix, derived from one of the Senator’s grafts, is now thriving at the park and evidently taking after its predecessor. Grafts have also been taken from Lady Liberty, so that she, too, may live on in the form of new trees, in the event she does not survive.

Would you like to see and experience these beautiful trees and learn more about their fascinating history? Big Tree Park is located at 761 General Hutchison Pkwy, Longwood, FL 32750. It is open from 8:00am to 6:00pm daily.

Imagine Our Florida, Inc. is proud to announce our first Certificate of Appreciation has been awarded to Lourdes Brown. Lourdes volunteered at the Thundering Spirit 3-day event where she quickly learned IOF’s Interdependence lesson plan and began perfecting her presentation. She tabled at the Orlando Earth Day event where she was a Lead Educator and then volunteered to be the Educator at an IOF Painting With a Purpose evening. After researching and writing the IOF Panther Lesson Plan, Lourdes has volunteered to research and write the IOF Manatee Lesson Plan.
Lourdes, your commitment and dedication to teaching people of all ages how to reconnect with our natural world and to coexist with our wildlife inspires us all to do more. We are proud to work beside you as together, we fulfill IOF’s mission to preserve and protect Florida’s natural resources, wildlife and land.

Your ticket for the: Congratulations Lourdes Brown