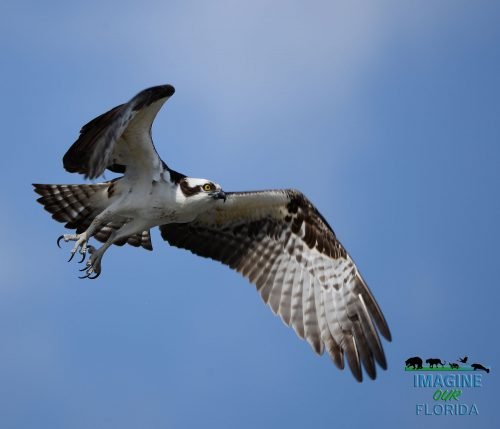 The Osprey (Pandion haliaetus) is a bird of prey that is commonly seen along coastal habitats within Florida. These birds have a brown upper body, white underside and a black line across their eyes. They can reach 2 feet in length and have a 6-foot wingspan. These raptors hunt for food by using their keen senses, especially their vision, and kill prey with their talons. This is the only raptor with a reversible toe that can grasp prey with two toes in front and two toes in the back. They will soar high above their prey and dive feet first often submerging themselves to catch their prey. Their feet are barbed to be able to hold on to slippery fish. Osprey nests are large platforms built mainly of large sticks, sod, and grasses high above the ground although they will use any high man-made structure. A female Osprey will be attracted to the male that can provide the best nest. Osprey mate for life and will have between 2 to 4, creamy white blotched brown eggs a year. The eggs do not hatch all at once but will hatch 3 to 5 days apart. They fledge at 8 weeks and reach sexual maturity at 3 years of age. Because of its highly visible nest, the Osprey is a prime indicator species that can be used to monitor habitat conditions, fish populations, and overall environmental health.

A Happy Osprey with a Fish

Also called the Fish Hawk, the Osprey is a medium-sized raptor that can be found throughout Florida. These apex predators are fascinating to watch as they catch their prey and enjoy eating it. There are many different species of Osprey and even two species who have been documented to be extinct. One of those species, the Pandion lovensis, was discovered through fossils here in Florida. The fossils dated back to the Tortonian stage of the late Miocene sub-Epoch of the Clarendonian age. That’s about 9 million years ago. During this time Florida was only an island. it spanned from the eastern Panhandle and curved down a narrow stretch of the gulf coast to central Florida. During this time temperatures were reducing and the Earth was going into the ice age known as the Quaternary glaciation. This process took approximately 3 million years in which average global temperatures dropped to between 4-7 degrees Celsius. Not all areas had ice. Florida was much cooler but was not part of the freeze. Despite the lack of a freeze, conditions could have presented the Pandion lovensis ability to survive. Fortunately, the Pandion haliaetus shown in this video managed to adapt to these conditions. Because of its ability to adapt, we can enjoy watching this magnificent bird almost anywhere we go throughout Florida.

Your ticket for the: Osprey