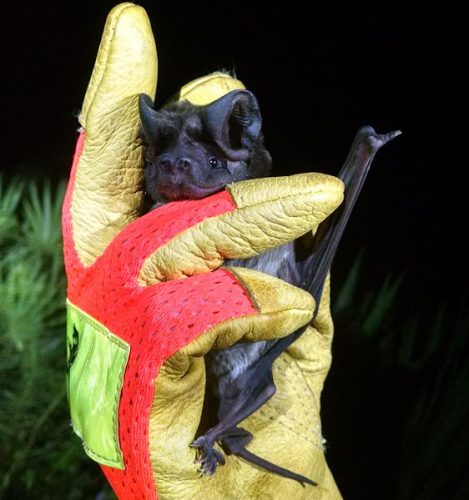 Florida deemed these bats endangered in 1993 but they were not federally listed until 2010.
This cool animal, a large free-tailed bat, is approximately 5.1-6.5 inches in size and is considered critically endangered. Color varies from black to brown to brownish gray to cinnamon brown.
Bats love to forage over ponds, streams, and wetland. They
drink as they are flying over open water. If their water source becomes dry, they will move to where this is water. Bonneted Bats have been seen drinking out of swimming pools and other open sourced waterways.
Bonneted bats have been seen nesting in the holes left be red cockaded woodpeckers in Longleaf pine trees as well as in the shafts of royal palms.
These wonderful animals live in some Central Florida counties with most living in South Florida. The total number of Bonneted Bats worldwide is estimated to be at around 250 . Bats in South Florida, including this species, appear to have declined drastically in numbers in recent years due to loss of roosting sites, effects of pesticides, hurricanes, and habitat loss from development.

Remember, what we may fear is not bad for us or the environment. Our fears demand us to educate ourselves about the amazing reasons why these animals are here and how they contribute to our Circle of Life.

Your ticket for the: Florida Bonneted Bat