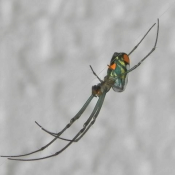 The Mabel Orchard Orb Weaver, Leucauge mabelae, is common throughout Florida. It is one of the prime examples of evolutionary adaption being that it has adapted to a wide range of habitats and climate. It can be found as far north as Canada and as far south as Columbia. Reproduction is similar to most spiders where sperm packets are transferred but the females can be very particular about their mates and if specific behaviors are not followed it could mean the male gets eaten.

These spiders are efficient at pest control and have been historically welcomed in agriculture to reduce pests that would otherwise destroy crops. They are also very effective against mosquitoes. However they become prey to many bird species. They are also hosts for wasp larvae. Wasps may paralyze the spiders and lay their eggs on them. As the wasp larvae grow they feed off the body of these spiders.

Perhaps one of the most notable facts about this spider is that it is the only spider family to receive it’s nomenclature from Charles Darwin. Darwin first discovered a spider in Brazil during his voyage on the H.M.S. Beagle. it didn’t fit into any previously noted genus so he classified it under Leucauge. This has become one of the larges groups of spiders currently documented. This is greatly due to it’s ability to adapt successfully to a changing environment through natural selection. This has lead to various species of these spiders. The one discovered by Darwin was named Leucauge argyrobapta. This species ,Leucauge mabelae likely selected for traits that helped it adapt to a different environment.

Your ticket for the: Mabel Orchard Orb Weaver