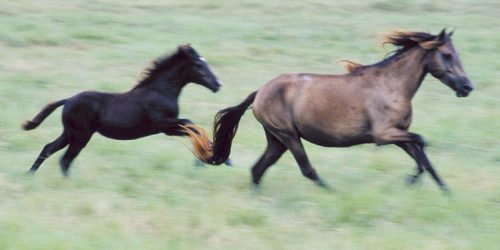 The Florida Cracker Horse is a valuable and vital part of Florida’s heritage. While still rare, there are now over 1,000 registered horses, and the number continues to grow each year. The Florida Cracker Horse traces its ancestry to Spanish stock brought to Florida in the 1500s. They were given their name from the sound of the whips cracking as they worked cattle. The Florida Cracker horse exhibits great endurance in an unfavorable environment. This horse exemplifies great patience and strength. The Cracker horse can work all day and night, traveling without any additional care requirements. When the horses were left to roam freely, they evolved over time as a result of natural selection. They were tempered and molded by a challenging environment. And, in addition to playing an important role in the lives of Seminole Indians, they eventually helped Florida become a state of agriculture and ranching. Through the efforts of several private families and the Florida government, the breed was saved from extinction, but there is still concern about its low numbers. The breeds low numbers are considered to be at a critical point. The state has three small herds in Tallahassee, Withlacoochee State Forest, and Paynes Prairie State Preserve. The state maintains two lines for breeding purposes and the line that roams the Paynes Prairie State Preserve for display purposes. By 1989, these three herds and around 100 other horses owned by private families were all that remained of the breed. The population is considered to be “critical,” meaning that there are between 100 and 300 active adult breeding mares in existence today. Effective, July 1, 2008, the Florida House of Representatives, declared the Florida Cracker Horse the official state horse.

Your ticket for the: Florida Cracker Horse