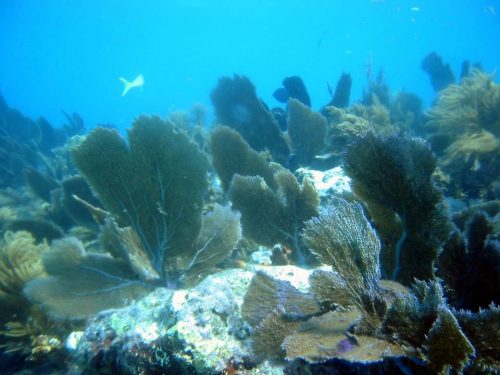 Florida is the only state in the continental United States with shallow coral reef near its coast. Coral reefs create specialized habitats that provide shelter, food, and breeding sites for numerous plants and animals. Florida’s coral reef system stretches hundreds of miles. It is the world’s third largest, with nearly 1,400 species of plants and animals and 500 species of fish. Marine scientists have found nearly half the reef was missing. Where once there were reefs, now are just seagrass and mud. The only reefs still intact and alive with fish and plants were far from the shore. Natural forces such as extreme rainfall and heatwaves may have played some part, but it is more likely that man was responsible. It probably took the combination of intensified fishing off the Florida Keys, the building of cities, causeways, pollution, the flow of freshwater, sediments, and nutrients from the land. Any of these factors may have led to the stress and decline of the reef. But it would have taken a combination of all of them to kill off half the Coral reef. Reefs are recognized as being essential to the whole marine ecosystem. Fish spawn and grow around coral, which in turn helps to regulate carbon dioxide levels in the oceans. They also protect coastal areas from erosion. Take out any part of the reef system and the whole is threatened. Protected reserves are urgently needed and fishing must be controlled, regulated and policed. Not only do farmers, cities and mining companies need to reduce their pollution as well as prevent the runoff of sediment and nutrients into the seas but climate change must be addressed. If oceans continue to absorb CO2, the increased acidity will be fatal and coral bleaching will continue to worsen. All we may have left will be the deeper reefs, and Florida’s rich, diverse and astonishingly beautiful coral reefs may all but disappear within a lifetime.

Your ticket for the: Coral Reef