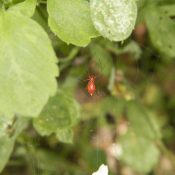 The black tailed red sheet weaver (Florinda coccinea.) These spiders get their name from the black crebelum or tail and the webs they weave which resemble a sheer material. They have two different parts of their web. The top part is intended to knock flying insects down and the bottom sheet catches them in a non-sticky web where the spider attacks the prey. They can be very useful in controlling flying bugs in your yard and are even encouraged as a pest control method in agriculture. They were historically popular among Florida orange groves.

The spiders can be found upside down in their webs. Typically, males are either the same size or smaller than the female. Smaller males can sometimes be seen in the same web as the larger females. Both take part in creating the web and cleaning it. Talk about the perfect couple.

Mating can get a bit complex though. The courtship ritual of these spiders consists of 18 different behaviors ranging from reduction of the web to the act of copulation. Spider sex can be a bit weird. The females first release their sex hormones onto the net. The male finds the female and reduces the web to prevent other males from reaching her. If the female approves of the male she positions herself. If the male tries to mate without permission there is a good chance the female may eat him. Mating is not done like most animals. The male deposits his sperm packets onto the web and then uses his pedipalps to place the packets into the females sex organs. They are stored near the ovaries until the female decides to lay eggs.

Next time someone tells you science is boring, tell them about the black tailed red sheet weaver and maybe they will start watching more nature and less Real Housewives.

Your ticket for the: Black Tailed Red Sheet Weaver