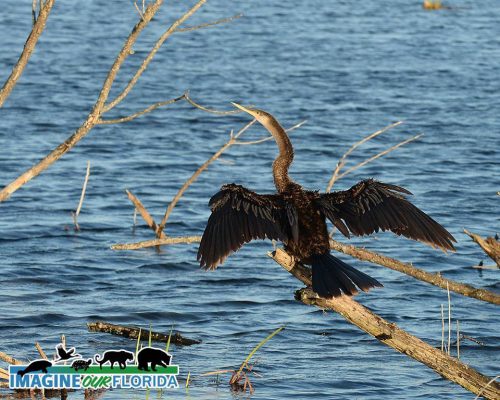 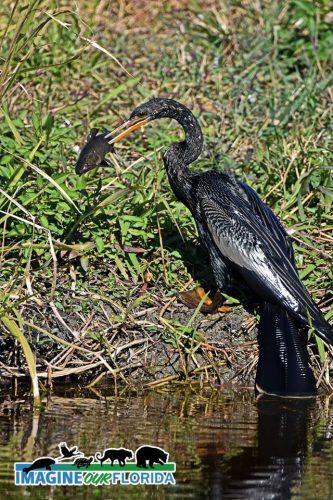 Anhingas are known as snakebirds because they swim with their bodies submerged while stretching their head and neck above the surface of the water, giving them the appearance of a snake about to strike. They are large, dark waterbirds with long, thin necks, bills, tails and silver patches on the wings. Males have greenish black plumage, accentuated by silver-gray feathers on their upper back. Their wings are edged with long white feathers. Females are brown with a lighter brown head and neck.

Anhingas hunt by spearing fish and amphibians with their sharp, slender beaks. They are so powerful that sometimes they have to leave the water with the speared fish and use a rock on the shore to remove the prey. Because of the unusual shape of their wings, and the lack of a gland that secrets oil like other birds, Anhingas become waterlogged. This makes it possible for them to dive easily and stay underwater for long periods of time.

After hunting, Anhingas sit in shrubs and trees with their back to the sun and stretch out their wings. This posture helps to dry their water-logged wings and warm their body after exposure to cold water. They prefer shallow, slow-moving, sheltered waters for hunting with access to nearby perches and banks for drying and sunning themselves.

Anhingas are monogamous. The male gathers the nesting materials and the female weaves together the nest. They are known to reuse the same nest year after year. The female will typically lay from two to six pale bluish-green eggs. The parents share incubation of the eggs for 25 to 30 days. Chicks will stay in the nest for 3 weeks. At 6 weeks they will climb onto the branch and fledge. They stay with their parents several more weeks before becoming independent.

This photo is of a male 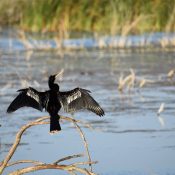 . Their scientific name is one that everyone can remember, Anhinga anhinga.

A common sight all across Florida, these birds occupy a variety of mostly freshwater habitats. They prefer slow moving lakes, ponds and backwater areas but can be found in saltwater areas as well. Excellent fishers, they dive to spear small fish and other small aquatic life. After fishing, they perch and dry their wings, as seen in this photo, so that they can fly again.

Protected by the Migratory Bird Treaty Act of 1918, the species is considered of least concern due to their stable population across their massive range. Apart from natural predators such as alligators, bobcats, and panthers; they are susceptible to being entangled in discarded fishing line. Their aquatic lifestyle also means that is pollutants are present in the water, Anhinga are susceptible to accumulating these contaminants.

Your ticket for the: Anhinga