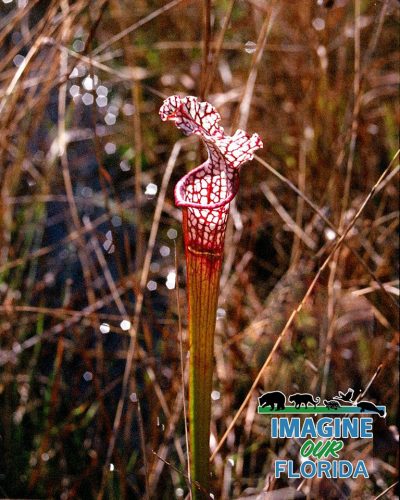 Florida has more carnivorous plants than any other state. They are mostly found in the panhandle but can be found in bogs as far south as central Florida. Their roots are mostly used to hold the plant in place. Many of the carnivorous plants reproduce by flowering and producing seeds. Some of these plants produce beautiful and showy blooms to attract pollinators.

Insects are attracted to the pictherplant’s sweet nectar which is secreted by its leaves. Once on top of the pitcher, the insect slips on the waxy opening and falls into the plant where fine hairs prevent it from escaping. Enzymes will produce a digested insect which provides the pitcherplant with much needed nitrogen.
Carnivorous Plants are sentinels of the general condition of their environment. One of the first things to go when wetlands degrade is its carnivorous plants.

Threats to pitcherplants include fire suppression, disrupted hydrology, feral hogs, and poaching of the plants.

Learning about Florida’s carnivorous plants may transform you into a naturalist!

Your ticket for the: Whitetop Pitcherplant