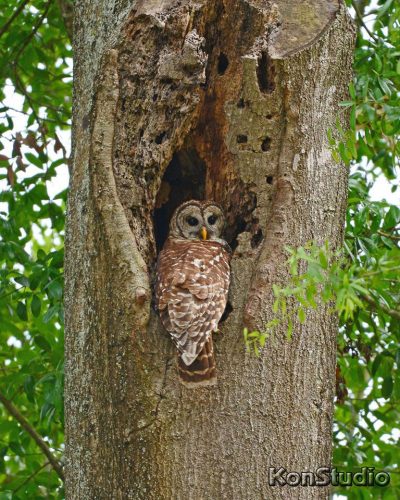 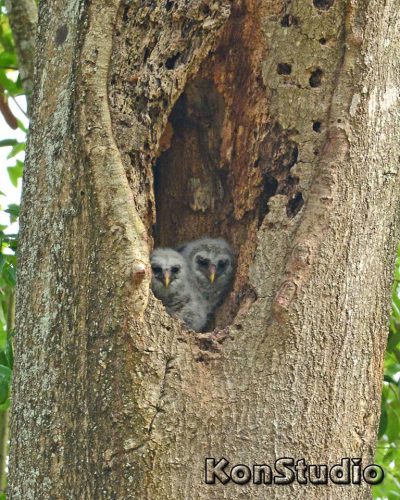 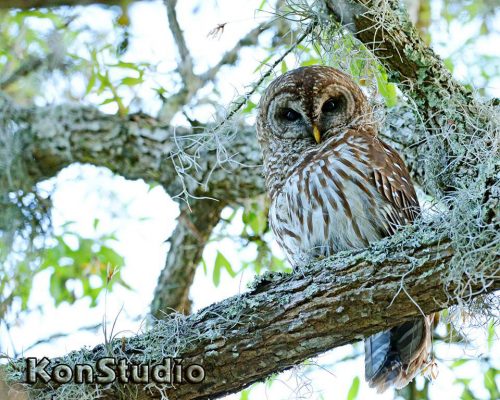 Barred Owls are native to North America and can be found in low-lying swamps, dense forests and most commonly, in deciduous or mixed woods. A suburban neighborhood can offer ideal habitat for Barred Owls when large trees are present although risk of being hit by a vehicle poses a danger. Pleistocene fossils of Barred Owls have been dug up in Floridaindicating these magnificent birds of prey have inhabited our state for at least 11,000 years.

Adult Barred Owls are 16–25 inches long and have a wingspan of 38–49 inches. They weigh 1.10 to 2.31 pounds. Their faces are pale with dark rings around the eyes and they have yellow beaks. Their chests are barred horizontally and their bellies are barred vertically. Barred Owls are the only species in the Eastern United States who have warm, dark brown eyes.

Prey consists mostly of small mammals, however, Barred Owls will also prey upon other small animals such as amphibians, reptiles, and birds. Hunts generally occur during dusk or dawn, although Barred Owls may be found hunting during the day when it’s raining or when raising young. Barred Owls have keen eyesight and will often perch on a branch while waiting for prey to appear. Using their night-vision, they will take flight and silently swoop in on their prey. Without any warning, they will snatch up the unsuspecting animal in their strong talons.

Perched close to each other when courting, both male and female will bow and bob their heads, raise their wings, and call out to each other. Barred Owl nests are often found high in a tree cavity although they have been known to move into an abandoned nest originally created by hawks, crows, or squirrels. Clutches consist of 2 to 4 white colored eggs. Eggs are brooded by the female during which time the male brings the food. Owlets hatch in approximately 4 weeks and are ready to take flight in about 6 weeks.

Your ticket for the: Barred Owl