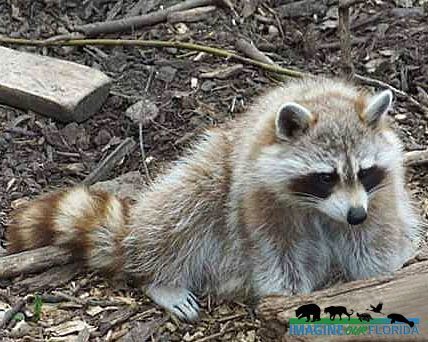 The raccoon is found mainly in North America. These scrappy mammals are considered to be highly intelligent. They are recognizable by the mask-like black fur around their eyes and light and dark rings around their tail. The rest of their bodies are covered in grey-brown fur and they weigh 8-15 pounds

Raccoons are omnivores and very flexible eaters. Their diet is determined by their environment and can include frogs, fish, insects, mice, eggs, plants and garbage. They are most active in the late afternoon and throughout the night.

Raccoons are mammals who communicate through a variety of hisses, growls, and whistles. There are seven known species of raccoons but only the Procyon lotor is found in Florida. They will stay in urban areas or an area with water sources. In the wild, raccoons live for 2 or 3 years. Females give birth to between one and seven young, generally in a tree hole or log. Young raccoons are called kits.

FUN FACT:
Raccoons are known for putting their food in water and there are theories as to why they do this. They aren’t actually washing their food but rather wetting it. Some think it is to enhance the taste of the food.

Your ticket for the: Raccoon