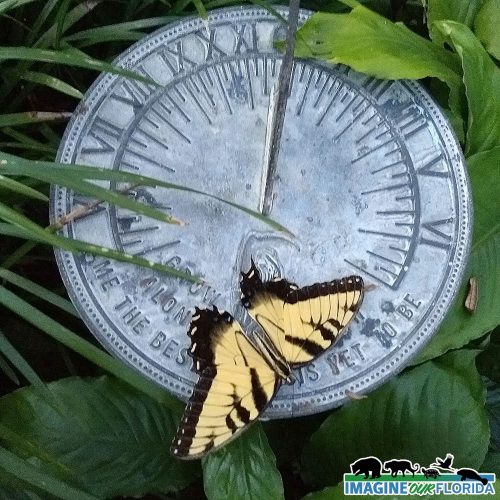 The Eastern Tiger Swallowtail has an average wingspan of 2 1/2 to 4 1/2 inches. They love to eat the nectar of many plants including wild cherry, honeysuckle, lilac, Joe-Pye weed, azalea, and milkweed.

This beauty is identified as a male because there is no blueish coloring in the hindwings. Some females are melanic (dark colored). An adult swallowtail’s lifespan is only about 2 weeks. They produce 2-3 broods a year in the south. Females lay a single egg on host leaves. Caterpillars will eat the leaves and rest on silken mats on the upper surface of leaves. The caterpillar is brown and white when it is young, but it changes color as it grows older to green with orange and black false eyespots. The eyespots are thought to scare away predators.

Your ticket for the: Eastern Tiger Swallowtail Butterfly