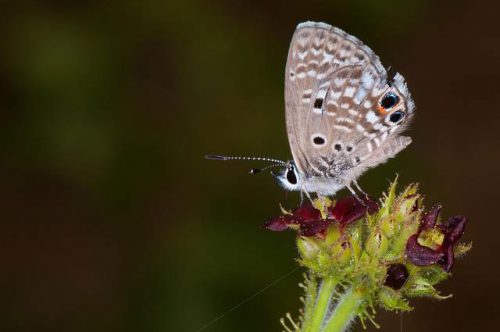 Miami blues are as big as a blueberry and have the weight of a dandelion puff. They were once found abundantly through 700 miles of Florida coastline, up and down both of Florida’s coasts and the Florida Keys. Their preferred habit is the beach berm. These butterflies pollinate the shoreline which helps prevent shore erosion. Due to the development and remodeling of the natural seashore and mosquito control spraying, Miami blues were unofficially declared extinct after Hurricane Andrew wiped out their last known colony in 1992.

Wildlife biologists found a couple of small populations in an uninhabited island in the Florida Keys Wildlife Refuge and began a breeding program. The butterfly uses two coastal plant species to lay its eggs, blackbead and gray nickerbean. Each can be found in abundance on many of the untouched Key Islands. These plants are ideal for the butterfly, who in its caterpillar stage, feeds on new growth found on the branch ends.

Adult Miami blues have a lifespan of between one and two weeks. They will stay within 30 feet of their birthplace. During that time, the females will lay between 20 and 100 eggs a day on host plants. It is suspected that when there is no new growth on the plants for them to feed on, ants colonies are store the butterfly eggs until more favorable conditions arise for them to hatch and become caterpillars. In exchange for this, the ants receive a sweet sugar substance from the caterpillar cocoon and do not harm it.

Miami blues are an endangered species and part of a 25-year long conservation effort. Vulnerable to hurricanes and climate change, this endemic butterfly can now be found only in Key West National Wildlife Refuge.

Your ticket for the: Miami Blue Butterfly