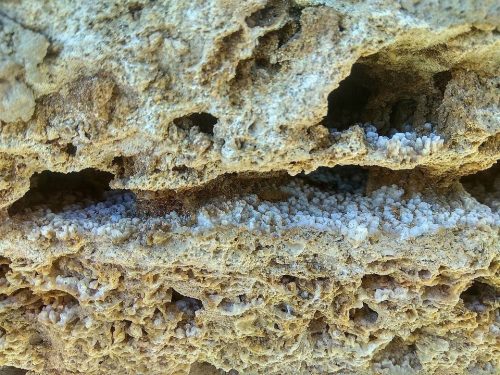 Coquina (“co-keen-ah”) is a sedimentary rock consisting of loosely consolidated fragments of both shells and coral. The cemented fragments are generally calcium carbonate or phosphate. The shells and coral are compressed and turned into a mass as rainwater filters through. The rainwater dissolves the shell’s and coral’s calcium carbonate which then glues them together. Coquina forms inshore environments such as marine reefs.

In the Oxford English Dictionary, coquina is a loanword from Spanish meaning “shell-fish” or “cockle” which is a type of bivalve mollusk. The word Coquina was first used as a reference to building stone in 1837 in the book The Territory of Florida by J.L. Williams.

There are many different kinds of shells and coral that can cement together. By identifying the shells or coral you can determine the age of the coquina. Sometimes the coquina may be covered in mud or weathered with age making the identification of the shell and coral difficult and that particular piece may remain a mystery. Many coquina rocks have only been formed in the last few thousand years but others can go back to different periods of time such as the Miocene age (20 million years).

Identifying the coquina and where it’s found is important to local geology. Since Coquina forms inshore environments, either marine or on land, determining the ages of coquina deposits can help reconstruct sea level rise and fall over time.

Florida has large deposits of coquina, and the soft, white rock was ideal for building. Coquina is a very soft building stone and needs to be dried out for a few years before it can be used. The Castillo of San Marcos Fort in Saint Augustine was built of coquina by the Spanish in the late 1600s. When the British attacked the Fort in 1702 during the Siege of Saint Augustine, they fired cannonballs at the Fort which had no effect. The cannonballs kept sinking into the soft coquina. Coquina is used as an ornamental landscape material today.

Your ticket for the: Coquina