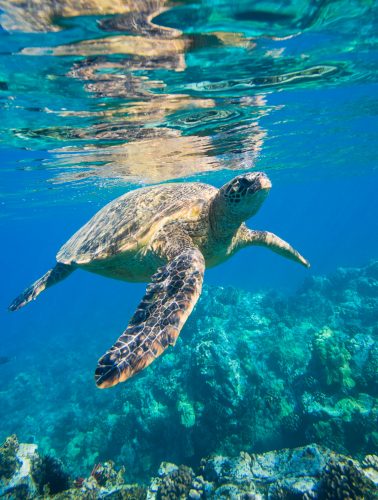 Marine habitats surrounding the Keys provide habitat for threatened and endangered species. The Florida population of Green Sea Turtle (Chelonia mydas) has been considered endangered since 1978. The declining population has been victim to commercial harvesting for eggs and food as well as incidental bycatch in the shrimp fishery. Florida is an important sea turtle nesting area. The majority of nesting in Florida occurs between May 1st and October 31st. About 90% of all sea turtle nesting in the United States takes place on Florida’s beaches. In order to prevent nesting and hatchling turtles from wandering off track, your beachfront property should use sea turtle friendly lighting. Never touch a sea turtle or pick up the hatchling, it interferes with the process of imprinting on their beach. The Green Sea Turtle has a rounded, oval body with a distinctive smaller head. Its name is derived from the greenish fat in its upper and lower shell. Incubation lasts approximately sixty days. As the nursery due date, between 4 to 5 days come closer, a depression forms in the sand that indicates hatchling movements. Soon, the babies begin digging out en masse, to start their journey to the water’s edge. The reflection of the moonlight on the water inspires their pathway to the sea. Turtles deposit approximately 100 golf ball size eggs, gently cover the eggs with sand and then they spread sand over a wide area to obscure the exact location of the chamber. A single female may nest several times during a season and then not nest again for one or two years. A male Sea Turtle never leaves the ocean. The Turtles live between 12 to 50 years. Once in the water, the hatchlings swim directly out to sea, facing a struggle to survive to adulthood. They range in size between 3 to 5 feet and weigh anywhere between 240 to 420 pounds. They mostly eat sea grass and algae, the only sea turtle that is herbivorous as an adult. Their jaws are finely serrated which aids in tearing vegetation. The estimate is there are between 85,000 to 90,000 nesting females. It may seem like a lot of nesting females laying eggs but the Green Sea Turtle is facing a high risk of extinction in the wild in the near future.

Your ticket for the: Green Sea Turtle