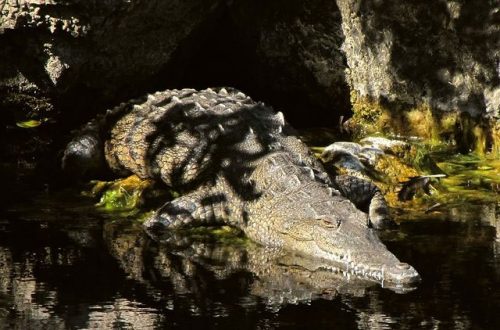 Florida is famous for many things, one of them being the only environment on earth in which American Alligators and American Crocodiles coexist. You may wonder what the difference is between the two. While they are related and do look very similar, crocodiles and alligators have some major differences. Crocodiles exist both in freshwater and saltwater, whereas alligators prefer freshwater environments. The obvious difference is their appearances. Crocodiles have longer, pointier snouts, alligators have shorter, more rounded snouts. When an alligator has its mouth shut, you won’t see any of its teeth. When a crocodile has its mouth shut, its back teeth stick up over the top lip. Because they are broader, alligator snouts are stronger than crocodile snouts, that allows them to crush hard-shelled prey such as turtles. Crocodiles are typically lighter in color, with tans and brown colors. Alligators are darker, showing more gray and black colors. Both members are excellent hunters. They have sharp, above water vision, night vision, sensitive hearing, and vertical pupils that take in additional light. Both have small sensory pits along their jaws that allow them to detect pressure changes in the water, and to locate and capture prey. They both prefer to swallow large chunks or swallow their prey whole. Crocodiles have higher functioning salt glands, that allows them to excrete higher amounts of salt from water than alligators can. Alligator glands do not function as strongly, which makes them less tolerant of saltwater environments so they prefer freshwater. Crocodiles can successfully migrate across multiple bodies of salt and fresh water. Alligators are regarded as more docile than crocodiles, only attacking if hungry or provoked. Crocodiles are regarded as more aggressive than alligators. Crocodiles are known to attack just because someone or something is near them. Crocodiles prefer to spend more time in the water. Alligators prefer to sunbathe on the banks or in mud close to the water. Female alligators will continuously mate with the same male alligators for life. Crocodile babies come from multiple mates. Crocodiles live longer than alligators. The average lifespan of a crocodile is between 70-100 years, while the average lifespan of an alligator is usually between 30-50 years.
You should avoid contact with both animals at all costs.

Your ticket for the: Crocodiles