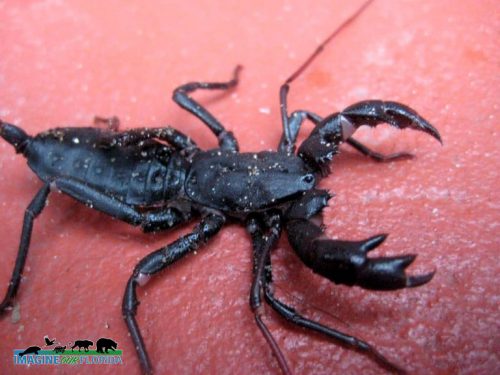 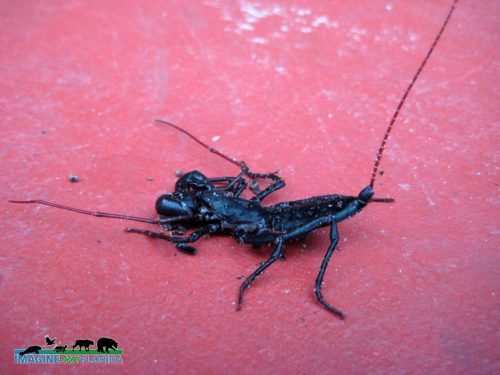 The Giant Whip Scorpion or Vinegaroon, Mastigoproctus giganteus, is the only whip scorpion with a tail found in the United States. Whip refers to its long thin tail. Vinegaroon is derived from the vinegar scent created by a spray of concentrated (85%) acetic acid that emanates from the base of the tail.

The Vinegaroon, an arachnid, can grow to 2 inches long. It does not have a stinger filled with venom like other scorpions. They have eight eyes which are rather weak. Nature has provided them with long, thin front legs to use as antennae to feel their food and a tail which serves as a sensory organ. They make their homes underground in well-drained soil. You will see them most often when they come to the surface during the rainy season.

After a 12-hour mating ritual in autumn, the female will carry the eggs internally for several months before laying 30 to 40 eggs into an egg sac. She will remain in her burrow for 2 months while holding the egg sac off the ground. once hatched, the white-colored babies and will ride on their mother’s back for about 30 days. After their first molt, the babies look like adults and will leave their mother. Before becoming adults, the new Vinegaroons will molt three more times at intervals of about one year. Life expectancy is 7-8 years.

Giant Whip Scorpions dine on Florida woods roaches, termites, and crickets. They catch their prey with their large pincers and kill them by crushing them with their teeth. Vinegaroons make tasty treats for raccoons, armadillos, skunks, feral hogs, and black bears.

If threatened, the Giant Whip Scorpion will either hide in its burrow or rear up and spread its legs. They may spray a vinegar scented acid which will accurately hit their enemy up to a foot away. The spray packs a mighty sting to the predator’s nostrils and eyes. If handles, they pack a powerful pinch.

Your ticket for the: Giant Whip Scorpion