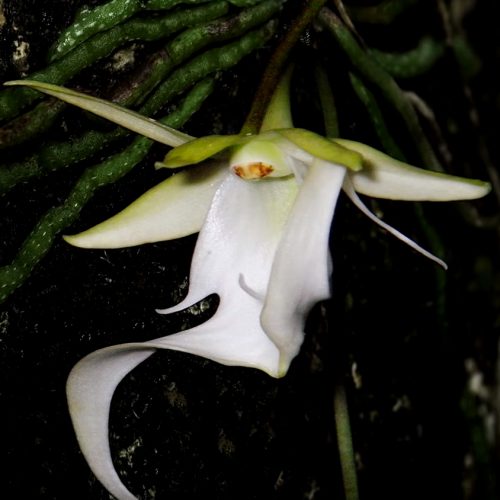 The Ghost Orchid (Dendrophylax lindenii,) is rare and endangered. There are only an estimated 2000 left in Florida. This orchid is prized for its long, white delicate petals. It is leafless and its roots attach to the host tree. The mass of green roots clings tightly to the trunks. It is distinguished from other species of orchid by the presence of thin white markings dotting its roots.

The Ghost Orchid gets its name from its ability to move at night. It appears as if it’s floating, like a ghost.

The Ghost Orchid is pollinated by the Giant Spinx Moth, whose long tongue can reach the nectar that is not accessible to many insects. The swamps of cypress, pond apple, and palm trees are its preferred environment. The orchids specific habitat requirements are high humidity, mild temperatures, and dappled shade.

The Ghost Orchid does not flower reliably. It will typically flower one to two weeks once a year. It requires a specific fungus (mycorrhizal) to be able to thrive. because it is leafless, the orchid relies on its roots to produce sugars from sunlight. The Ghost Orchid has a symbiotic relationship with the fungus as it gathers nutrients from it in exchange for extra sugars.

Habitat destruction and development, as well as over collecting, have been responsible for the decline of ghost orchid populations. The Ghost Orchid is a protected species in public land areas.

With gratitude to Jay Staton for his patience and perseverance in capturing this rare sight.
JAY STATON -Published on Oct 20, 2014
“A ghost orchid’s flower takes, on average, 2 days to fully open. This short video shows the remarkable beauty of the most sought-after orchid in the world, including background sound that gets you in the mood.”

Your ticket for the: Ghost Orchid