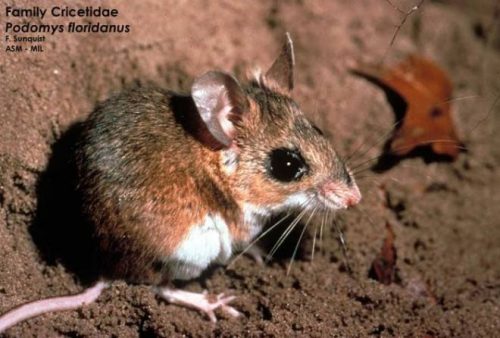 The Florida mouse is the State’s only endemic mammal. This mouse is a microhabitat specialist, centering its activities on gopher tortoise burrows in sand pine scrub or longleaf pine, turkey oak habitats. Florida mice construct their own burrows within the larger burrow of the gopher tortoise. Each adult female mouse uses about two tortoise burrows, alternating her residency with successive litters. Females begin to breed when they reach a weight of approximately 27 grams. Litter size is between 2-4 and the young mature very slowly. Occasionally two adult females will use the same tortoise burrow. Their diet consists of crickets, ticks, fruit, seeds, and berries. A baby of a Florida mouse is called a pinkie, kitten or pup. The females are called doe and males buck. A Florida mouse group is called a nest, colony, harvest, horde or mischief. They are listed as Vulnerable, considered to be facing a high risk of extinction in the wild. It is on the IUCN Red List of Threatened Species. They are not on the federally protected species list. They average between 5 to 8 inches long and their tails are between 2 to 3.5 inches long, weighing between 1/2 ounce to 1 ounce. The Florida mouse has soft silky fur that is brown or brownish orange in color. Its underparts are white. Their ears are large and furless. Their tails are long and their back paws are large in size and have 5 pads. Their teeth are sharp and they use them for gnawing. They are nocturnal, resting in its nest during the day and active at night searching for food. They communicate by emitting high pitched squeals and when they are excited they thump the ground with their front paws producing a drumming sound. The Florida mouse also has a distinctive odor almost like a skunk. They are also known to carry several diseases such as hantavirus pulmonary syndrome, salmonellosis, leptospirosis and tularemia which can be transmitted to humans.
If one should enter your house, be sure to use a live trap and release the Florida mouse outside where Nature intended.

Your ticket for the: Florida mouse