The species is listed under 40 different names, more than any other mammal in the U.S. Depending on where they are found, these names include cougar, mountain lion, mountain screamer, and catamount. The species is found from Canada to the tip of South America. Cougars are

the largest member of the cat family that can purr. The larger or “great cats” such as tigers, lions, leopards, and jaguars cannot purr.

The geographic range of the species is larger than any other terrestrial mammal in the Western Hemisphere. The historical range of the Florida panther once included the southeastern U.S. from Arkansas to North Carolina including all of Florida.

One of the most threatened animals in the world, the shy and elusive Florida panther now resides in an isolated pocket within a mere 5% of its historic range.Since 1973, the panther has been considered an endangered species by Federal law. The Eastern cougar that once lived in the northeast U.S. is now extinct. The breeding population of Florida panthers is restricted to the area south of Lake Okeechobee and their exact numbers are not known, but it is believed that there are only 100-160 individuals remaining. 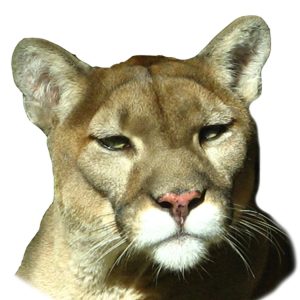 In the early 1990s, there were fewer than 50 individuals, which led to inbreeding depression and genetic defects including kinked tails and cowlicks on their backs. To help restore their genetic diversity, eight Texas pumas were brought into Florida. This helped restore and strengthen the population.

Loss of habitat is the greatest threat to the Florida panther. Males require home ranges of up to 200 square miles, and females up to 75 square miles. Their ranges, like those of other wild cats, depend on the availability of food sources. The Florida panther preys mostly on white-tail deer and feral hogs. Raccoons, armadillos, and rabbits are other prey items.

Young male panthers roam great distances in search of new territory and when panthers wander, they are in danger of being struck by automobiles. This is the largest cause of panther deaths every year. Left alone, panthers can live up to 12 years old or more.

Increased awareness, more speed zones for panthers where they cross, more wildlife underpasses and overpasses, as well as a continuous Florida wildlife corridor would help tremendously for their survival. Where they are available, panthers use underpasses. Since they are solitary, another common cause of death is interspecies aggression as individuals try to stake a claim to a territorial range.

Male panthers weigh from 100 to 160 lbs. and females from 70 to 100 lbs. Males and females usually only get together to mate and after a gestation period of about 93 days, one to six kittens are born. Kittens are born spotted to blend in better with the foliage where they hide when their mother is not around. Their blue eyes open when they are about 3 weeks old. The young stay with their mothers until they are about 1 ½ to 2 years of age.

There are physiological differences between the Florida panther subspecies and other cougars in North America. They are smaller, have longer legs, and their skull is flatter with a broader nasal bone. This is believed to be an evolutionary adaptation to the high humidity in Florida.

There is no such thing as a black or melanistic panther. The term “black panther” relates to melanistic leopards or jaguars, a name possibly originating from the genus for these greater cats, Panthera.

As a symbol of our beautiful wilderness, the iconic, majestic Florida panther deserves our full protection. If they were to vanish, Florida would never be the same.

Your ticket for the: The Florida Panther