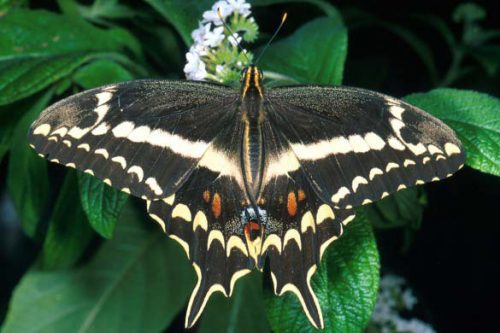 The Schaus’ swallowtail, Heraclides aristodemus ponceanus, is a large black and yellow butterfly endemic to Florida. This butterfly is found only in Florida and is restricted to intact tropical hardwood hammocks.

Once ranging from the Miami area south through the Florida Keys, the Shaus’ swallowtail is currently restricted to only a few remnant tropical hardwood hammock sites on the south Florida mainland, northern Key Largo, and several small islands within Biscayne National Park. Adults fly slowly and leisurely and are very adept at flying through the dense hardwood hammock.

Adults have a wingspan range of up to 2.3 inches with females being the largest. Males have yellow-tipped antennae. The upper surface of their wings is black with a row of yellow or white spots and a broad yellow or white band. The hindwing tails are outlined in yellow. The undersides of the wings are yellow with brown markings and a broad blue and rust-colored band.

The Schaus’ swallowtail produces one generation each year from April to July with the peak time occurring typically from mid-May to mid-June. Adult emergence and reproduction are correlated with the beginning of the Florida rainy season. However, the pupae may remain in diapause for more than one year if optimal weather conditions are not present. Females lay green eggs singly on new growth. The developing larvae then feed on the young growth.

Listed as an endangered species, threats to the remaining population include the loss of genetic diversity due to inbreeding, climate-related impacts such as drought, habitat disturbance from fire, tropical storms or hurricanes, mosquito spraying, and loss of habitat. Hurricane Andrew left behind only 73 butterflies in 1992 after sweeping through the butterflies’ home range. Because their habitat is limited, it is possible that a single hurricane can make the Schaus’ Swallowtail extinct. However, the protected status and their rebounding numbers after Hurricane Andrew bring renewed hope that this gorgeous butterfly will survive and thrive in our beautiful state.

Your ticket for the: Schaus’ Swallowtail