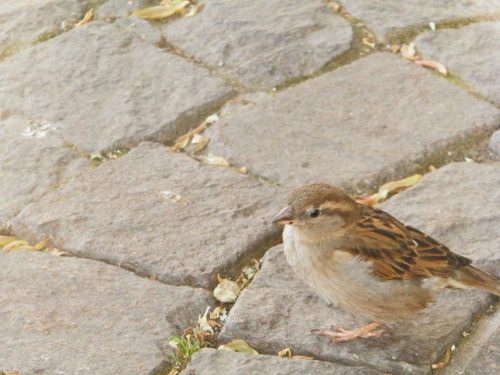 House sparrows were introduced at various stages throughout New York (Barrows 1889), Maine, Massachusetts, and Nova Scotia. Some of these releases were a sentimental connection to the homeland of many European immigrants. Others were to help control cankerworms or linden moths(Marshall 2014). In some cases, the release of house sparrows failed and the birds died without breeding. One of the more successful attempts was in Nova Scotia. This population spread and the presence of other populations in the U.S. Northeastern states may have helped them thrive.

Today, house sparrows have spread throughout all of the United States, most of Mexico, and the southern parts of Canada. They have even made their way to South America. In most regions, they are considered an invasive species due to their aggressive and territorial tenancies. They will even go to such extremes as to damage the nests of other birds. They out-compete many native birds for food and reproduce at a rapid rate making them difficult to control. Oddly enough, many places in Europe are seeing declines in house sparrow populations. The United Kingdom has a 71% reduction since the mid-1990s. This decline has been linked to avian malaria and areas of increased nitrogen dioxide. Italy experienced a 49% decline in house sparrow populations from reductions in nesting sites, reduced food availability, and possible disease. Paris reported a 12.4% reduction by year primarily due to city gentrification. Yet, these birds continue to thrive in North America.

One way you can help is by providing a nesting box for house sparrows. If eggs are laid you can simply poke them with a pin to prevent the eggs from further developing. Removing the eggs entirely can cause the female to produce more eggs at a faster rate. Removing an entire nest could force sparrows into more wild landscapes and could pose a greater threat to native birds. While we might never be able to fully eradicate house sparrows from Florida, it never hurts to try and reduce the growing population.

The photos below show a male (Left) and female (Right). They are sexually dimorphic with the male having a classic black mask across his eyes.

Your ticket for the: House Sparrow