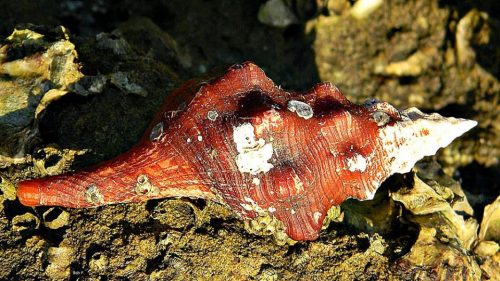 The state shell of Florida is the Horse Conch (triplofusus giganteu). It was designated the state shell in 1969. The Florida horse conch is the largest snail to be found in American waters. It can grow to a length of two feet. The shell protects their soft bodies from predators. They use a foot, that extends from their shell that allows them to drag the shell along. Horse Conchs are commonly found in seagrass beds and reefs. This snail is carnivorous and will feed on clams and mussels as well as other snails. The shell is grayish white to salmon in color and covered with a brown, scaly outer layer which you will see peeling. The 10 whorls of the shell are knobbed. Young shells are orange. The animal inside the shell is orange to brick red in color. The female attaches capsule-like structures to rock or old shell. Each capsule contains several dozen eggs. Not all eggs are fertile. Non-fertile eggs are eaten by those who are maturing in the same capsule. When the young emerge they are an orange color and usually 3.5 inches in diameter.
The Horse Conch’s predators are mainly humans who use them for their shells and food. Other predators are the octopuses who use their suction cups to suck the conch out of its shell. Some starfish are able to slip one of their arms into the opening of the conch and will then force its stomach out and ingest the conch right from its shell. The word “conch” comes from a Greek word meaning “shell.”

Your ticket for the: Horse Conch