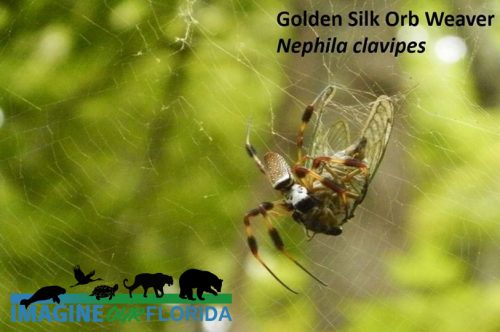 The golden silk orb weaver is frequently dreaded by hikers and bikers in the forest. Their webs pop out of nowhere and despite their size, their color variation helps them blend into the forest. These heart-attack inducing spiders might give us a scare but they are harmless. Their large webs catch flies, bees, wasps, moths, and butterflies. There is at least one friend of these spiders. Orange and pecan farmers appreciated their cooperation in keeping pests away from their harvests.

Smaller males come out to mate between July and September. The females produce at least two egg sacs per year but have been recorded to produce up to nine.

Climate change has mildly affected these spiders behavior but they have adapted by creating a reflective carapace and by turning the cylindrical part of their body towards the sun to reduce the body surface that is heated. They also reduce heat by holding a drop of water in their chelicerae (mouth-part) and allowing it to evaporate. This has allowed them to adapt very well to their environment.

Next time these little guys give you a scare, take a second to appreciate the hard work they do in helping crops and keeping other insects from overpopulating.

Your ticket for the: Golden Silk Orb Weaver