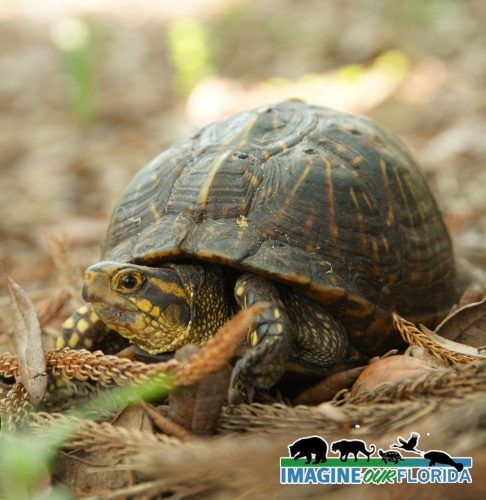 Florida Box Turtle, Terrapene Carolina Bauri. This cute little girl is a great example of what the Florida box turtle looks like. Florida box turtles are a terrestrial species which typically inhabit damp forests and marshes. They can be found from the Keys north to the very southern portion of Georga. Their shell is dark brown to black with yellow radiating stripes.

The males have a concave plastron and both male and female have a hinged shell, which allows them to fully close up in their shell.

They are omnivores, feeding on fruits, mushrooms, and various bugs and other small creatures. They are a protected species in Florida. The selling of them is prohibited in the state and you may not be in possession of more than two box turtles. Habitat loss and road mortality are two major causes of their decline in population.

Your ticket for the: Florida Box Turtle