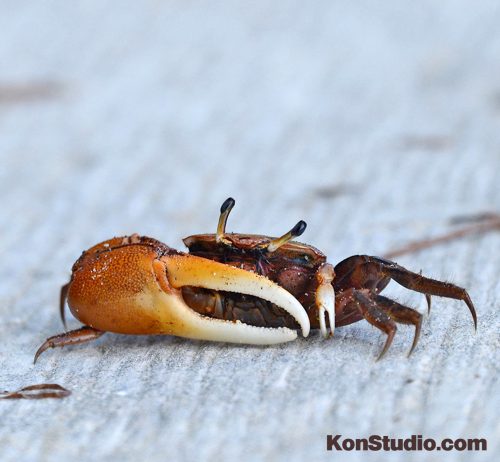 Fiddler Crabs, genus Uca, live in the tidal sands of mangroves and salt marshes. They are experts at sensing the ebb and flow of the tide because their survival depends on it. Although they have gills, Fiddler crabs can drown if there is too much water. At high tide, they retreat to their 12″ burrows in the sand and seal the burrow with mud or sand.

During low tide, colonies of Fiddler Crabs get down to business doing their part for the ecosystem when they come out in the hundreds to work and eat. To build and maintain their burrows, they use their small claws to move sand to their mouths where they strain and extract nutrients. Clean sand pellets are spat out. Although their diet consists of algae and decomposed matter, Fiddler Crabs are tasty meals for shorebirds, fish, and land mammals such as raccoons and foxes.

Female crabs incubate eggs for 2 weeks. During high tide, the female will release the larvae who will float away. In a few weeks, the surviving young crabs will drift back to shore and join a Fiddler Crab colony.

Male Fiddler Crabs have one oversized claw that looks like a fiddle. While it is sometimes used to defend against other male crabs, the large claw is primarily used in courting rituals. To woo his desired female, the male Fiddler crab will dance while waving his giant claw until the lady agrees to join him in his burrow.

Your ticket for the: Fiddler Crabs