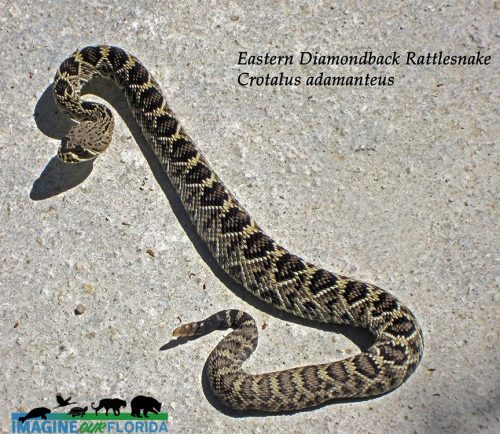 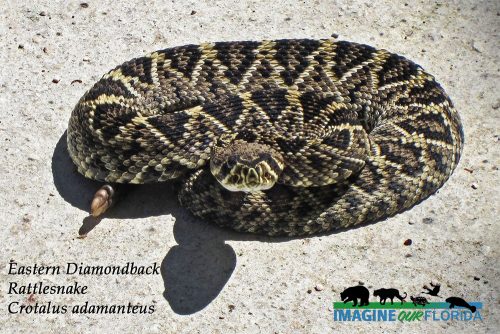 Today, we look at a very important member of Florida’s ecological community. The eastern diamondback rattlesnake is one species almost everyone can identify. Found across the entire state of Florida including the Florida Keys and several barrier islands, the only snake that looks even a little similar is the timber (otherwise known as Canebrake) rattlesnake.

The largest recorded eastern Diamondback was 96 inches (8 feet!) in length. Today, however, you would be considered lucky to see one as large as 6 feet long. They are found in pine flatwoods, longleaf pine, and turkey oak, and sand pine scrub areas. These areas are also prime for development.

A combination of a loss of habitat and the indiscriminate killing of these snakes by the general public upon site has caused a major population decline. They are currently afforded no protected status in Florida.

This is a species that must be respected when encountered. They can strike up to 2/3 the length of their body. Like other snakes, we are not prey to the D and they would be just as happy if we would leave them alone. If you encounter one of these amazing animals, observe from a safe distance and allow it time to pass, or simply walk around it.

In the United States, the vast majority of venomous snake bites occur when someone is trying to kill the snake. Attempting to kill these snakes greatly increases your risk of being bitten. They will not chase you and in fact, are very afraid of you. One of our Facebook friends commented with a wonderful little rule of thumb that I really like, 30/30. Stay 30 feet away for 30 minutes and they will leave. As he pointed out, this will hold true most of the time so long as they are not waiting for food to go by.

Please, give these wonderful creatures the respect they deserve as fellow residents of our great state!

Your ticket for the: Eastern Diamondback Rattlesnake