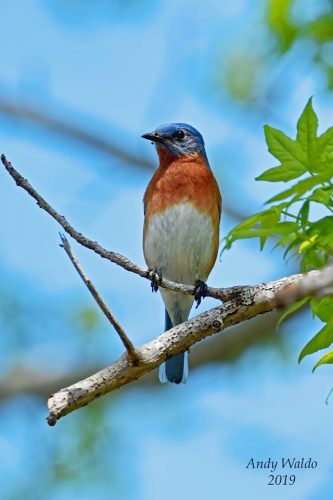 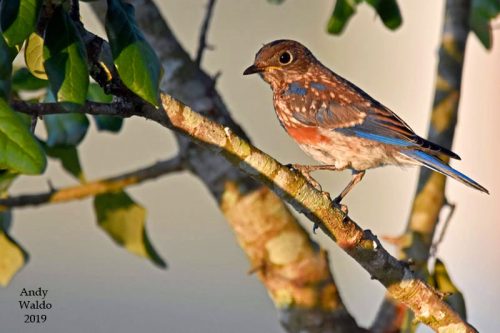 The Eastern Bluebird, Sialia sialis, is part of the songbird family of thrushes. Once declining at an alarming rate due to introduced species, pesticides, and habitat loss, Eastern bluebirds have made a stirring comeback. The population increase has been aided by birdhouses built especially for the bluebirds along bluebird trails.

Male bluebirds flutter and sing to attract a female. The new couple will find a tree with a cavity such as an old woodpecker hole or a birdhouse. The female does most of the nest building and will loosely construct a nest of twigs and grasses lined with softer material such as feathers, animal hairs, or fine grass. There she will lay 3-7 pale blue or white eggs.

Incubation takes 13-16 days and is mostly by the female. When the nestlings are born, both parents will feed their young. Since Eastern bluebirds have 2-3 broods per year, it is not unusual to see a young bird from a previous brood help with feeding. Meals consist of a wide variety of insects. They also enjoy berries, earthworms, and snails.

Eastern bluebirds are monogamous while nesting but can be found in small flocks during the rest year. We hope a flock of bluebirds will fly over the rainbow and visit all of you this year.

Your ticket for the: Eastern Bluebird