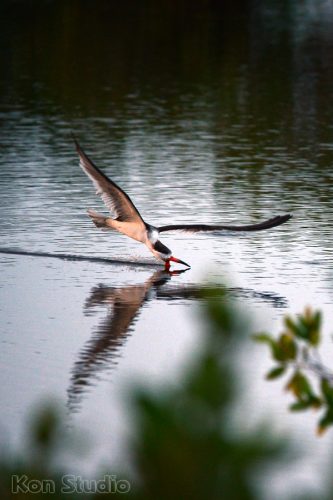 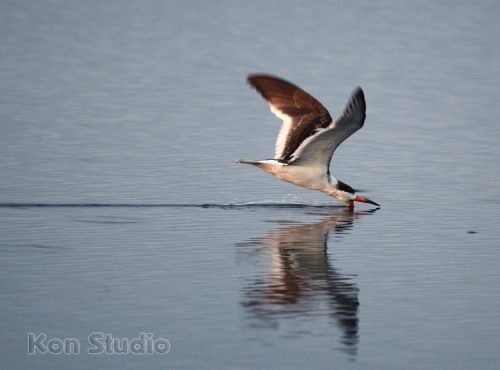 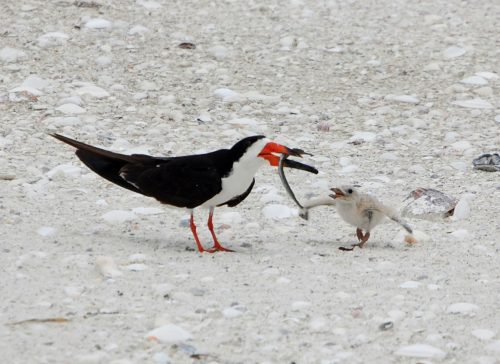 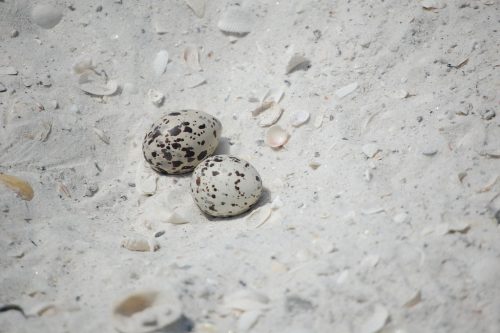 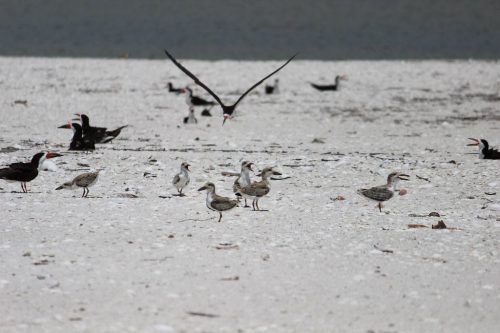 Black Skimmers, Rynchops niger, are seen flying low to the water with the lower part of their bills skimming the water for food. Their bills are wide at the top and come to the point. When a skimmer senses a fish in the longer, lower mandible of its bill, the upper part instantly snaps shut.

Striking and easily recognizable, skimmers are medium-sized tern-like seabirds with red and black bills and a wingspan of 3 to 3.5 feet. They have black wings with white edging, black backs, and a white underside and head. Black skimmers inhabit coastal areas such as beaches, estuaries, and sandbars.

Breeding and roosting occur between May and early September in colonies of up to several hundred pairs. Skimmers lay three to five eggs which are incubated by both parents for 23-25 days. Skimmers are protective parents and the colony acts as a village when it mobs a predator as a group in an effort to protect nests. The young fly at 28-30 days old. A successful colony will use the same nest site next year.

Black skimmers are threatened in Florida and are protected by the U.S. Migratory Bird Treaty Act. Coastal development and human activity without regard to seabirds pose the biggest threat. Predators such as crows, raccoons, opossums, coyotes, and feral hogs find skimmer eggs and chicks to be a delicious meal. Pets, beach driving, recreational activity, oil spills, shoreline hardening, and more cause parents to abandon their nests. Sea level rise poses another threat to the black skimmer population.

With your help, black skimmers can make a successful comeback. Heed the signs you see while at the beach. Call the number on the signs at a beach near you and volunteer to make a difference. Let’s all do what we can now to protects these beautiful Florida seabirds.

Your ticket for the: Black Skimmers