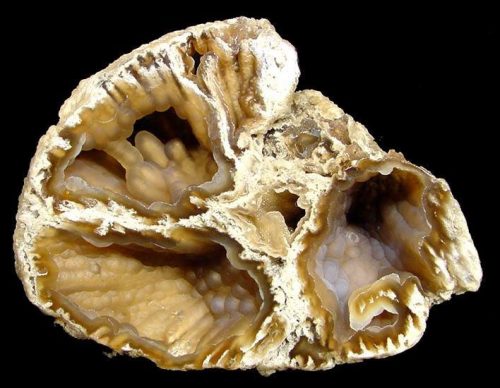 — Agatized Coral —
Agatized Coral (Cnidaria anthozoa) is Florida’s state stone. The Florida legislature designated it the state stone in 1979.
Coral is the limy outside skeleton of tiny ocean animals called polyps. Agatized Coral, AKA Fossilized Coral, is formed when agate, a form of chalcedony replaces the minerals in coral. This process takes 20-30 million years and is known as pseudomorphing.
These fossils are from the Oligocene-Miocene period. Agatized Coral is between 38-25 million years old. These fossils are found in a variety of colors, from white, pink, gray, brown, black, yellow and red. Trace minerals in the agate create these colors. They are found in ancient ocean beds, where silica-rich groundwater has percolated through the limestone around them. This may give the fossil a banded stone look.
Agatized Coral is most often found in the Tampa Bay area, the Withlacoochee/Suwannee River, and the Econfina River. Most Agatized Coral found in Florida lived in the vast Eocene seas which covered the state when Florida was part of the continental shelf.
Agatized Coral was used by the first inhabitants of Florida to make spearheads, containers, tools, knives. Remains have been found in archaeological sites dating back to 5000 B.C. The Agatized Coral is highly prized by collectors today

Your ticket for the: Agatized Coral