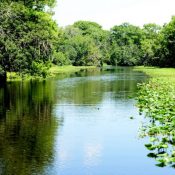 2. Newborn babies have even more, ringing in at 78 percent water.

3. A gallon of water weighs

4. A liter of water weighs 1 kilo; a cubic meter of water weighs 1 tonne. (The rest of the statistics are in imperial units since they are U.S.-based and so is this site; but the original metric system was created with base units that could be derived from the weight of a specified volume of pure water … hence the nice round numbers.)

7. Ninety-seven percent of the water on Earth is salt water; the water found in the Earth’s lakes, rivers, streams, ponds, swamps, etcetera accounts for only 0.3 percent of the world’s fresh water. The rest is trapped in glaciers or is in the ground.

8. There is more water in the atmosphere than in all of our rivers combined.

9. If all of the water vapor in our planet’s atmosphere fell as water at once and spread out evenly, it would only cover the globe with about an inch of water.

11. Approximately 400 billion gallons of water are used in the United States per day; nearly half of that is used for thermoelectric power generation.

14. A running toilet can waste up to 200 gallons of water each day.

17. The first water pipes in the U.S. were made from hollowed logs.

19. There are around one million miles of water pipeline and aqueducts in the U.S. and Canada, enough to circle the globe 40 times.

20. 748 million people in the world do not have access to an improved source of drinking water

21. And 2.5 billion people do not have use of an improved sanitation facility.

22. Some 1.8 billion people worldwide drink water that is contaminated with feces.

24. On average, an American resident uses about 100 gallons of water per day.

25. On average, a European resident uses about 50 gallons of water per day.

26. On average, a resident of sub-Saharan Africa uses 2 to 5 gallons of water per day.

27. It takes .26 gallons of water to irrigate one calorie of food.

28. (Yet it takes 26 gallons for one calorie of food when water is used inefficiently.)

35. In developing nations women and girls are primarily responsible for collecting water; on average, 25 percent of their day is spent on this task.

36. Collectively, South African women and children walk a daily distance equivalent to 16 trips to the moon and back to fetch water.

Your ticket for the: 36 eye-opening facts about water