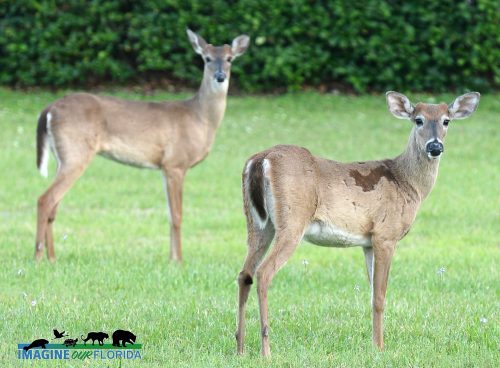 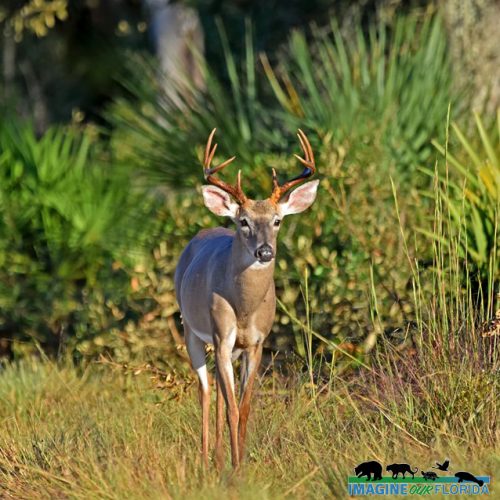 White-tailed deer are found throughout Florida. They are most often seen at dawn, dusk, or on overcast days near the edge of a forest where they browse vegetation and can quickly run back into the forest to avoid a predator. Some of their favorite foods include twigs, leaves, acorns, mushrooms, and fruit. Deer are herbivores and enjoy many of Florida’s native plants including buttonbush, tupelo trees, beautyberry, and persimmons.

In northern Florida, male deer can reach weights of 190 pounds although the average weight in Florida is 115 pounds. The average weight for a female is 90 pounds. White-tailed deer in Florida are smaller than their northern relatives because their bodies have adapted to the steamy temperatures. Their smaller bodies allow deer to use less energy to regulate their body heat. Adults are 55-80″ tall.

Male deer, known as bucks, grow antlers to establish dominance and attract does. Their antlers begin growing in the spring and will grow a velvet-like tissue. The tissue will dry up and the buck will scrape it off by rubbing his antlers against a tree. The smooth, hard antlers are then ready to be used to fight if another male is pursuing the buck’s desired doe. Antlers are shed in late winter or early spring. They will regrow within 6 – 8 weeks which is perfectly timed to the beginning of the breeding season.

Deer breed from September to March. Gestation lasts approximately 200 days and the doe will give birth to 1-3 fawns. Fawns will start foraging with their mother at 3-4 weeks and are weaned at 2-3 months old. They will set out on their own when they are 6-18 months old

White-tailed deer get their name from the white on the underside of their tail. To alert other deer of possible danger, white-tailed deer will raise and wag their tails like a flag. You may also see them stomp a foot and hear them snort. Their predators are panthers, bobcats, coyotes, dogs, and humans.

Fun Fact: Fawns are born with no scent. To keep her fawn safe from predators, the doe will hide her fawn in tall vegetation. She will visit the fawn several times a day to nurse but will leave quickly so her scent does not attract predators. If you find a fawn hidden among the brush, leave it alone and know that mom will soon return. #NatureKnowsBest!

Your ticket for the: White-tailed Deer