The Florida black bear has captured our hearts and

continues to be an inspiration in our efforts to preserve and protect Florida’s natural resources, wildlife, and land. Highly intelligent, charismatic and majestic, the Florida black bear is an iconic animal, a symbol of our cause and the face of our organization. But besides being a flagship species, the Florida black bear is also an important umbrella species.The Florida black bear is the largest land mammal in the state, but their size is not the only reason they are called an umbrella species. An umbrella species is one whose habitat encompasses large stretches of land containing many different kinds of plants and animals. Black bears are forest dwellers and require lots of room to roam. Depending on food availability, males can have a home range surpassing 100 square miles, while females can require 25 square miles.

In utilizing large areas of natural habitat, the range of the Florida black bear includes a variety of forest types including mixed hardwood hammocks, pine flatwoods, sandhills, and sand-pine scrub, as well as forested wetlands. Bears forage for different kinds of food within and between these forest types, depending on the season. Umbrella species require geographically large and diverse areas of natural habitat. These areas are home to many other threatened and endangered animals such as the gopher tortoise, Eastern indigo snake, and the Florida scrub jay. In sharing living space with these other species, the Florida black bear acts as a protective umbrella, ensuring the preservation of various animal and plant species living within those habitats. This biodiversity means a healthy ecosystem for all. Why should we as humans care about biodiversity and a healthy ecosystem?
In protecting the bears and their habitat, we are also protecting ourselves. In a fast-paced, technologically advanced society like ours where we are too often far removed from the natural world, this is sometimes hard to remember. Besides being peaceful places for recreation, the forests offer protection of our water sources and help provide cleaner air by breaking down and absorbing pollution. When bears are happy and thriving, all the woodland creatures benefit, including other mammals, reptiles, amphibians, birds, plants, invertebrates, and even fish. But humans also benefit.
With human population growth and development on the rise, healthy habitat for the Florida black bear and the myriad other species under the umbrella decreases. To ensure the continued survival of all these species, it is vitally important to preserve and protect the habitat that remains. Keeping our focus on the protection of the Florida black bear is a good strategy not only because they are strikingly beautiful, but because their well-being is inextricably linked to the health and well-being of so many other species, including humans.

“The Florida black bear historically roamed throughout the peninsula of Florida and southern portions of Georgia, Alabama and Mississippi (Brady and Maehr 1985). From the 1800s to the 1970s, numbers of Florida black bears were significantly reduced due to loss and fragmentation of habitat and unregulated hunting” (Cory 1896; Hendry et al. 1982). 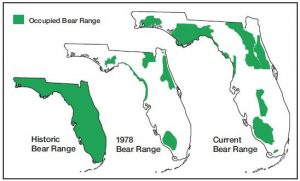 For 21 years, Florida black bears were protected from hunting and their numbers increased. However, in 2012 the Florida Black Bear was removed from the Florida state list of threatened species.

Although classified as carnivores, the Florida black bear’s diet consists of 80% plant material, 15% insects, and 5% animal matter. A major source of the bear’s diet, saw palmetto berries, has been harvested by humans for years. The berries are sold as herbal supplements. In July 2015, Florida forest service put a moratorium on permit issuance for the harvesting of saw palmetto berries on state land. Destruction of acorn-producing oak trees is also taking away food from the bears and other wildlife. Trees are being destroyed for timber and to make way for more cattle-grazing land in our state and national forests. Longleaf pine restoration is appearing to be disturbing the bear’s habitat during the up to nine-year installation.

Florida black bears are extremely adaptable. Their diet consists of a diverse collection of plants and animals. Here’s a breakdown of what Florida black bear diets have consisted of. When certain foods are out of season or not abundant that year, bears will switch to one of the other food sources available.

This is just a short list. In some areas, bears have become accustomed to anthropogenic food supplies. One study referenced the Lake Wales ridge which has been vulnerable to development. Bears in this area adapted by consuming garbage and citrus fruit ( Murphy et al 2017). Other studies identified dominant foods by both region and season (Stratman 1998; Dobey 2005). These foods might be the most preferable but they aren’t the only foods available.

Stratman R. M. 1998. Habitat use and effects of prescribed fire on black bears in northwestern Florida. University of Tennessee, Knoxville. 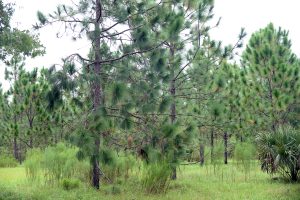 In the absence of human influence and when only natural food sources are available, a bear population will not outgrow its food sources. If food is scarce, bears will have fewer, and in some cases, no cubs.

In preparation for denning in the winter, bears can consume in excess of 20,000 calories per day. When natural food sources are poor, bears must go in search of food often traveling many miles, which unfortunately puts them in danger of encounters with humans.  Human carelessness such as leaving trash, pet food, bird seed, and dirty barbecue grills outside or in screened in porches draws bears into neighborhoods for a quick meal. Often this results in relocation or worse. When a bear is deemed a “nuisance,” he/she is killed. 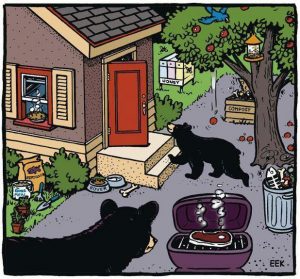 The perceived threat of bears hurting humans is based on irrational fear. There is no documented case of a human being killed by a Florida black bear…EVER! However, humans kill an alarming number of black bears, even excluding legal hunting. Roadkill numbered 243 bears in 2015. 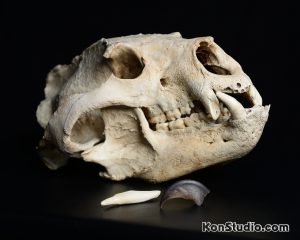 There are seven Bear Management Units (BMUs) in Florida, each representing a distinct subpopulation of the subspecies of Florida black bear. 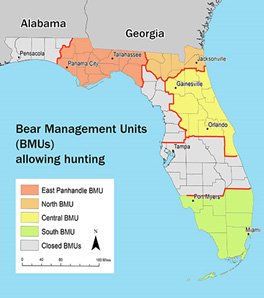 An estimated 75% of Florida residents who voiced their opinion were opposed to the bear hunt. This included phone calls, letters, and emails to the governor, FWC and other lawmakers.

3,778 permits were sold to hunt only 320 Florida black bears, more permits than bears in the state of Florida. Since bears had not been hunted in 21 years, they were trusting and naïve, a recipe for disaster.

There were 28 lactating females killed during the bear hunt of 2015. With 1 to 4 cubs born to each mother, that means that an average of 70 cubs were left orphaned. Bear cubs remain with their mother for up to 18 months. With most cubs born in January, these cubs were approximately 9 months old at the time of the October hunt.

The number of bears killed in the hunt was 304. However, that number doesn’t count:

While FWC’s target was 20% including death from means other than hunting, the known death toll was over 21.5% of the total population of Florida black bears. Meanwhile, the human population in Florida continues to grow by more than the entire bear population every week.

Most hunters do not eat the bears that they kill, making this a blood sport, thrill kill, and trophy hunt.

Within 13 hours of the hunt, quotas were exceeded in the East Panhandle and Central regions. By the end of the 2nd day, the hunt was called off completely.

There is no science to support the supposition that hunting decreases human-bear conflicts or that bears that habituate to humans are more likely to be aggressive. 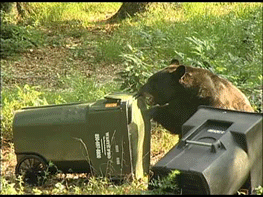 Your ticket for the: Florida Black Bear