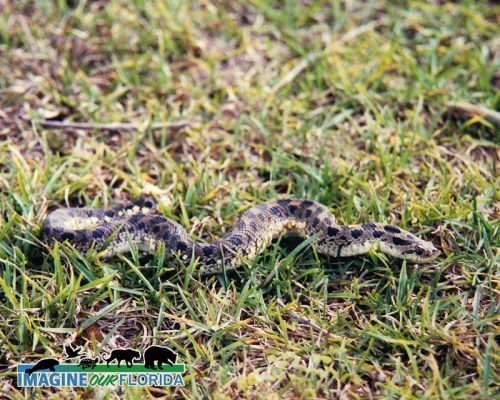 The Southern Hognose Snake, Heterodon simus, is a species often considered non-venomous. They do, however, possess a mild toxin that is considered medically insignificant and harmless to humans (A few people have had allergic reactions to hognose bites). They inhabit areas with sandy soils, sandhills, pine-oak forests, scrubs, agricultural areas, and coastal dunes, from northern to central Florida.

As the smallest of the hognose snakes, they will grow to between 1 and 2 feet. Their eyes are round. Body color runs gray-brown to tan and the tail’s underside is the same color as the body. Their bodies’ back and sides have irregular, dark brown-black blotches which are separated by orange-red blotches running along the spine. The neck has large blotches and the forehead is marked with a dark band which runs from each eye to the corners of the jaw. The snake’s scales have lengthwise ridges. The scales on the tip of the snout are strongly upturned.

The diet of a Southern Hognose snake consists of frogs, toads, and lizards. They have rear fangs which are used to puncture inflated toads and are immune to the poison produced by toads.

When a Southern Hognose snake feels threatened, it may play dead or flatten its neck and hiss. They live underground and are active during the day. However, you will rarely encounter one of these snakes as they have declined in number.

In the summer, females lay 6-14, thin-shelled, leathery, whitish eggs in either sandy soil or logs. The eggs hatch between September and October.

These snakes are of Conservation concern throughout their range. Their decline is due to introduced fire ants, the loss of longleaf pine forest, urban sprawl, and the conversion of habitats to agriculture. The Southern Hognose Snake is listed as vulnerable, and at risk of extinction on the IUCN Red List of Threatened Species.

Your ticket for the: Southern Hognose Snake