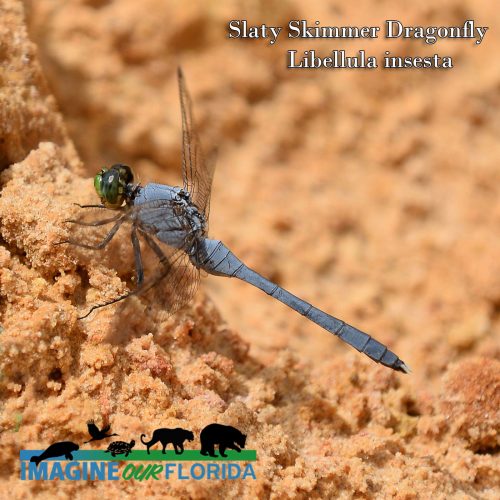 — Slaty Skimmer Dragonfly. (Libellula incesta) —
The Slaty Skimmer is one of the most common species of the dragonflies. They are found in marshy ponds, lakes, and slow-flowing forest streams with muck bottoms. This male landed on a sand pile.
Females stay away from the water’s edge except during mating and when laying eggs in the water. After the eggs hatch, they emerge as wingless, water-breathing, immature forms called naiads. Naiads will live in the water for up to four years. Even as a naiad, the dragonflies are carnivores. They dine on mosquitos, butterflies, moths, mayflies, gnats, flies, bees, ants, crickets, termites, and other dragonflies. In short, if the Slaty Skimmer can catch it, it will become dinner.
The Slaty Skimmer dragonfly is found in all 50 states, Canada, and Mexico. Scientists are researching why their population is declining in Wisconsin.
Slaty Skimmers can see almost 360 degrees, however, they can not see what is behind or below them. The Slaty Skimmer’s vision lacks the clarity that we see. They can see ultraviolet and polarized light which allows them to navigate easily.
The dragonfly is one of the most beneficial insects to humans. They are revered in Japan as the country’s national emblem. Over the ages, dragonflies have been viewed as omens, a sign of good luck, a warning of caution, magical, and were once considered real dragons. When you see a dragonfly as beautiful as the Slaty Skimmer, just remember this – Dragonflies pre-date dinosaurs and had a 3-foot wingspan.
Connect. Respect. Coexist.

Your ticket for the: Slaty Skimmer Dragonfly