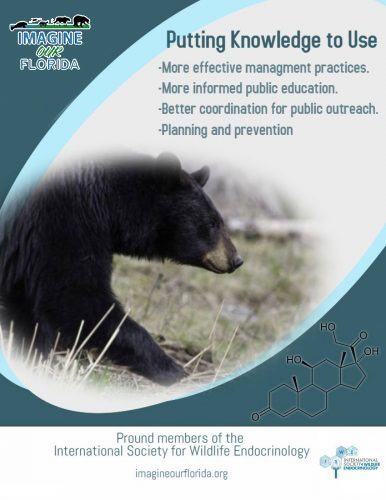 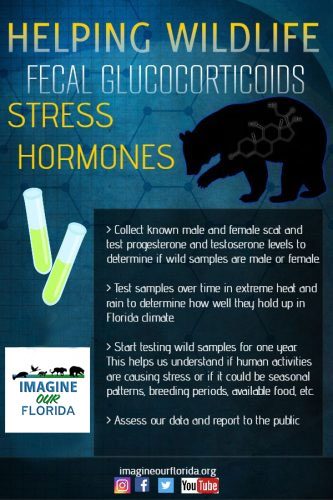 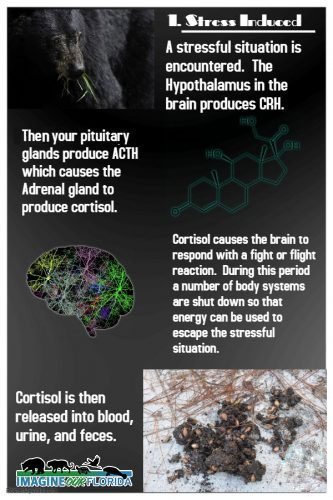 Stress Hormone Analysis of Scat from the Florida Black Bear

Introduction: The current proposal will focus on identifying Glucocorticoids in Florida black bear populations to identify if ongoing forest conversion projects are increasing stress levels.  This is important considering the increase in human-bear interactions since the projects began.  Our goal is to discover if stress levels increase in areas of high disturbance and which areas have the highest stress factor.  If the projects are increasing stress levels, the projects can be reevaluated to mitigate conflicts and can be used to determine factors that have a negative impact on future bear populations.  Samples will be sent to a professional lab that specializes in glucocorticoids.  The method proposed was previously used in Sweden (Græsli, A. R. , 2014) , Canada (Bourbonnais, 2013), and Montana (Stetz , 2013) with reliable results.  We plan to apply these techniques in Federal and State Forests in Florida to gain insight into our own unique ecology and forestry management.

Background: The iconic Florida black bear once inhabited nearly the entire state of Florida but has since been reduced to 17% of its original home range (Dixon et al., 2006).  The unique subspecies was removed from the state threatened list in 2012  when it was determined the species successfully recovered.  In 2015 a hunt was authorized under the assumption that the population was healthy and growing.

Subsequently, in 2010 the U.S. Forestry Services implemented the Forest Health Project which aimed at habitat modifications within the national forests.  Florida’s national forests began a series of conversion projects which directly affected the Florida black bear’s primary habitat.  The conversions involved the restoration of longleaf pine and wiregrass ecosystems.  Longleaf forests are thought to have been widely dispersed in the southeastern United States prior to European settlers.  Due to the logging and turpentine industries, these forests were reduced to 2% of its previous range. These conversion areas are burned every one to two years instead of the previous five to seven year intervals prescribed  prior to conversion.  Saw palmetto berries, an important food source for the Florida black bear during denning months (Ulrey, 2008), requires approximately five years between burns to produce a productive supply of berries.  These plants are often removed from the converted forests.  The increasing number of forest conversions resulting in loss of food source, denning habitat, and including clear cutting, roller chopping, and burning, as well as the presence of hunting in bear habitat presents challenges that could increase stress in the species.

Methods: Study Location: Scat samples will be selected from areas in bear habitat within each of the seven Florida Bear Management Units (BMU) and will be used to determine stress levels. Glucocorticoids are steroids hormones which are excreted in feces and urine during high stress periods.  Samples will be collected by placing small segments of scat into plastic vials.  These vials will be labelled with a sample number and site location.  Samples will be logged using a data sheet with GPS grid coordinates if available.  If GPS is not available the most accurate grid coordinates will be used.  Samples will be shipped to a specialized laboratory  for analysis.  Results will be documented in a spreadsheet and compared by site location.  Considerations will also be taken based on gender to determine differences in males and females.   We have received proper permits to collect specimens within Florida State Parks and have approval from the Florida Fish and Wildlife Conservation Commission.

Hypothesis and expected results:  Given the increase noted in two previous studies using the same method, we expect stress levels to be higher in female populations.  We also expect higher stress levels in areas surrounding conversion projects.  Natural occurrence such as wildfires would likely cause an increase in stress hormone secretion. Mass habitat modifications, such as forest conversions or development, are another likely stressor for bears.

Discussion: These results would give a better understanding of behavioral factors that likely influence ideal habitat selections for the Florida black bear.  This is important when forest managers draft their biological impact assessments.  The information gathered from this study will be available for the purpose of managing projects in a manner that would reduce stressors for bears.  By reducing stressors it would likely reduce human-bear interactions by ensuring basic needs, such as food and denning availability, are not restricted in a way that bears relocate into urban areas to satisfy these needs.  Human-bear interactions can pose safety risks but with education, communities can make efforts to change behaviors.  Local government agencies can weigh options to develop better policies for their communities by providing bear proof trash cans, implementing ordinances, and by making local announcements when projects occur that could potentially lead to an increase in human-bear interactions.

Weaver, K. M. (2000). Black Bear Ecology and the Use of Prescribed Fire to Enhance Bear Habitat. Workshop on Fire, People, and the Central Hardwoods Landscape. Retrieved September 5, 2016, from http://www.fs.fed.us/ne/newtown_square/publications/technical_reports/pdfs/2000/274 papers/weaver274.pdf

Your ticket for the: Research – Florida Black Bear Stress Hormone Analysis of Scat