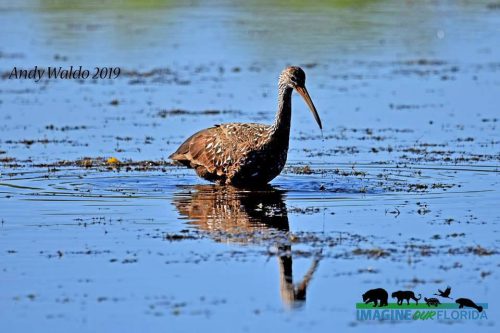 The Limpkin (Aramus guaraunas) is a unique looking bird. It is brown with white spots and streaks, densest on the head and neck, with a long yellow bill. The Limpkin is 25 to 29 inches long, with a wingspan of 40 to 42 inches. Because of their long toes they can stand on floating objects as well as swim. Limpkins get their name from the seeming limp when they walk. They are also known as the wailing bird or crying bird due to their loud, mournful call at night.

Limpkins’ diet consists of apple snails and freshwater mussels. Adapted for foraging on apple snails, the bill is slightly curved to the right so it can slip into the snail. When closed, the bill has a gap right before the tip. The bill then acts like tweezers when it needs to feed. They will also eat, worms, insects, frogs, and lizards.

The Limpkin’s habitat includes the shores of ponds, lakes, rivers, swamps, and open freshwater marshes. Their nests are made up of twigs and any kind of vegetation. They are built on anything from floating vegetation to tree limbs. Both parents incubate the eggs during the day but only the females incubate at night. The clutch size is between 3 to 8 eggs which range in color from grayish white to deep olive with brownish or purplish gray streaks. When they are born they can run, walk and swim. This bird was once very common in Florida but because of the decline of its primary food the Florida Apple Snail and loss of habitat, it is listed as a species of special concern.

Did you know: A group of limpkins is known as a “hobbling”.

Your ticket for the: Limpkin