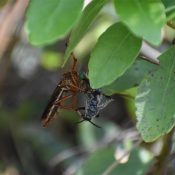 Hanging Thieves robber fly, Diogmites salutans. This large fly hangs from leaves and branches waiting for its favorite food, bees, dragonflies, and biting flies like horse flies to pass by. It then takes chase and captures its prey in flight. It takes its prey to a branch or leaf where it pierces it victim with its mouth parts and drinks its fluids.

In this photo, you can see the behavior that earned this fly its common name of Hanging Thieves.

The genus Diogmites consists of 26 species in the United States, with 12 of those species living east of the Mississippi river. This species is best found in damp, sandy areas that are more open with tall grasses. This photo was taken in just such a spot on the edge of a pine forest.

Your ticket for the: Hanging Thieves robber fly