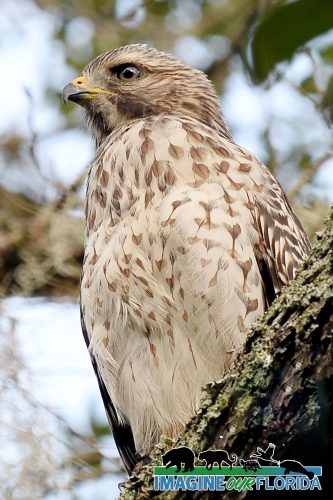 — Cooper’s Hawk (Accipiter cooperii) —
The Cooper’s hawk is widely known and dispersed throughout the U.S., lower Canada, and Mexico. You may see this stealth hunter gliding low to the ground to grab its prey in a split second. They are raptors who will eat other medium-sized birds such as robins and jays but will dine on rats, mice, squirrels, bats, and an occasional lizard or snake.
The Cooper’s Hawk was declining in population throughout the U.S. due to hunting and pesticide use, the worst of these was DDT. Since DDT has been banned and hunting in many areas has been curbed, populations have become more stable.
Cooper’s Hawk eggs and hatchlings are susceptible to being food for other animals like raccoons and raptors. When there is a threat near their nest, you will hear them ka-ka-ka-ka.
Remember the circle of life when removing unwanted wildlife from your home. If you use poison to kill a mouse or a rat, the dying animal will likely be eaten by a cat, snake or raptor which will die from the poison too. The poison can also kill a third animal such as a turkey vulture who feeds on the dead raptor, cat or snake.
Connect. Respect. Coexist.
Image by Kon Studio

Your ticket for the: Cooper’s Hawk