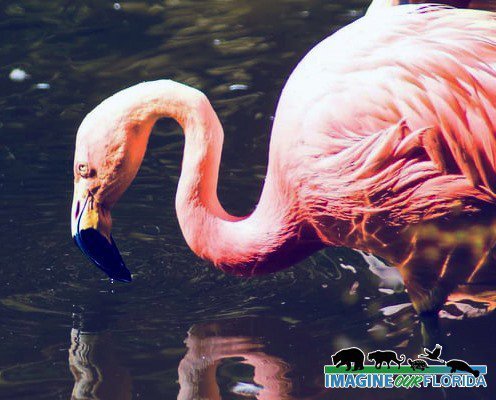 The American Flamingo (Phoenicopterus ruber) stands 5 feet tall with a wingspan of 50 inches. Their bright pink color comes from their diet of snails, crustaceans, and crabs and algae. Without this specific diet, they would turn gray.

The most unusual thing about Flamingos is their tongue. It is encased in the lower jaw and does not move. The tongue squeezes mud through structures in the bill, called lamellae which act as a strainer to extract insects, brine shrimp, algae, and other small prey.

Flamingos are wading birds and can be found around a water source. They have very long, thin necks and legs. Their heads are small and their bills are large, heavy, and have a crook. Young flamingos have straight bills but the crook develops as they get older.

The Flamingo stands on one leg to conserve heat as their legs have no feathers. Conserving heat is also why they bury their heads in their feathers. It also makes it easier to stand on one leg and reach down into the water with their bills to catch prey.

Flamingos are monogamous. The flock will mate at the same time so the eggs will hatch collectively. The flock protects the young from predators. The mated pair will make a mound of mud and the female will lay one egg which is between 3 to 3 1/2 inches long. It hatches in 27 to 31 days. Hatchlings are born white and turn pink within 2 years. Both parents produce a crop of milk in their upper digestive tract which they feed to the young until they start to eat solid food.

Florida has already removed the American Flamingo from the non-native list. Hopefully, flamingos will regain their native species status and become subject to federal and state protections. Conservation efforts to protect American Flamingos will be necessary to ensure these birds continue to survive even as they face increasing threats from habitat loss, pollution, and invasive predators. This historic population is in the very beginnings of a recovery. When we work together, we will ensure that the American Flamingo will not become extinct.

Your ticket for the: American Flamingo